Biking For Your Life

5 cyclists have been killed in 2012 alone in Boston, and over 500 crashes that required medical attention.  The dangers of biking in the City are clear – impatient and fast drivers, jaywalking pedestrians, double parking, dooring, right hooks, and poor road conditions to name a few.  As the city continues to grow the bike lane network by painting lines in the 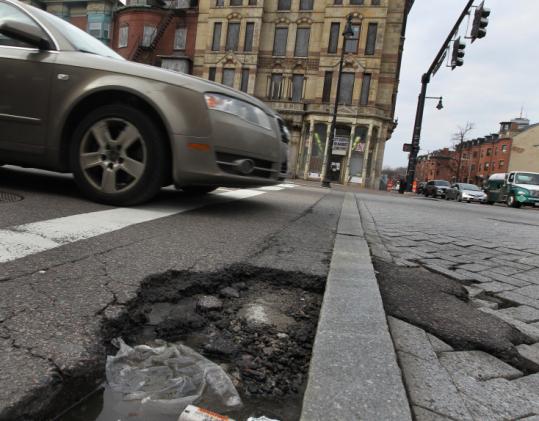 vehicle travel lanes, they should reflect on the short and long term goals of the bike network growth to determine how to best address the issues of safety and accessibility.  Are painted lines truly going to protect our citizens?

The number of cyclists in the city is growing, quickly.  With the success of the Hubway bike share program, community outreach and services, and improved infrastructure the bike community has grown three-fold in a matter of just 5 years.  Almost 3% of residents bike to work, and over 200,000 trips by bike are taken weekly.  Boston’s bike and transit user share is already among the most progressive of cities across the US, and high congestion of our roads and transit systems is persuading more bicycling in the City.  The ‘safety in numbers’ perspective further influences people to ride, and the result is a wide distribution in the skills of riders operating within already-stressed roadways.

Activists of all modes of travel are often quick to blame drivers or the cyclists for dangerous behavior or failure to pay attention, however the fault is fairly extraneous when one considers the conditions in which the roadway users are operating.  Drivers on the roadways are in a constant battle to advance their position for the sake of time, the precious entity of the isolated individual.  Bicyclists and pedestrians also work to travel with purpose, however are more physically and emotionally integrated into their surroundings.  Each mode of travel incites a variety of emotions and attitudes, and the aggression that is often associated with vehicle drivers is a function of the isolation and purpose with which they travel. 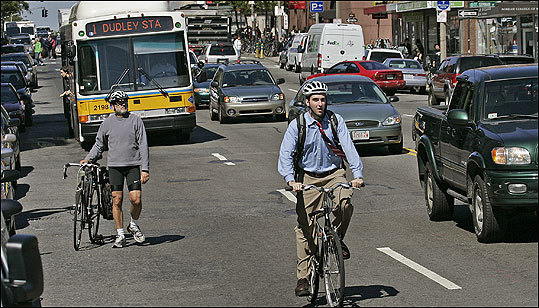 Driving in Boston streets is a difficult task, becoming increasingly complicated as cyclists take to the roads and sidewalks at will.  With such a range of bicyclists, it becomes nearly impossible for drivers and pedestrians to predict the interactions and behaviors of cyclists.  An auto driver must be in constant awareness of the cars around them, the pedestrians crossing the street (often at random), and the cyclists which can come from any direction and travel in any lane, at a wide range of speeds.   Double parking, unpredictable lane changes, irregular driving of cabs, potholes, and many other incidents keep vehicle drivers constantly preoccupied.  To expect that safer driving is within reason is a superficial and idealistic ‘solution’ to the issue. 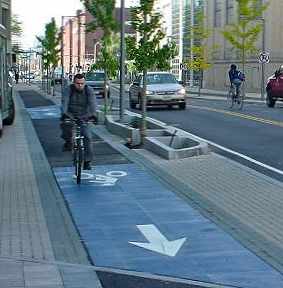 In order to keep bicyclists safe and thus encourage higher cycling rates, physical separation from drivers is necessary.  Bike paths on busy roadways provide a 30% risk improvement to roadways with parked cars and no bike infrastructure, however physical separation reduces the rate of accidents by nearly 90%.Without explaining all of the social, environmental, and financial benefits of bicycling, it is important to understand that even drivers should advocate for improved bicycling facilities in order to promote cycling; the more bikers, the less cars on the road which means less congestion for vehicles.

The question becomes: how do you value a life in comparison with the financial investments required to make the most dangerous roadway safe for all road users?  At what point do we concede that the death of our citizens is an unacceptable tradeoff for faster and more convenient vehicle travel?

4 of the 5 deaths in the City this year have been as a result of collisions with large vehicles – MBTA buses, tractor trailers, and construction vehicles.  They have been on main corridors – Commonwealth Ave, Huntington Ave, Massachusetts Ave and Brookline Ave.  They happen at intersections for the most part, on roads with poor biking infrastructure and high rates of auto travel.  The causes of bicycling accidents are not a mystery, and the distribution of accidents is fairly centralized to several of the key corridor roadways with the highest volume of riders and drivers.  Mass Ave, Huntington and Commonwealth account for almost one-third of all accidents across the city, about 70% of which occur in the main intersections of the roadways.

How do we address this safety problem so that the citizens feel safer in their streets and are not killed or injured in seeking a healthier and more sustainable lifestyle?

The answers lie in a combination of policies: lower city speed limits, traffic enforcement of bikers, pedestrians and drivers, improved roadway paving conditions (including shoulders), raised crossings at key intersections, designated high-capacity vehicle routes, coordination with the MBTA and avoidance training for bus drivers, and most critically by improved infrastructure in the form of cycle tracks wherever possible and bike lanes when space is limited.  Physical separation from traffic is key in creating more safe routes and promoting ridership among all demographics.