The Challenges with Nuclear Energy – Leaks, Meltdowns and Waste Disposal

The Fukushima-Daiichi nuclear power plant meltdown in Japan exactly 5 years ago on March 11, 2011 brought to light the risks to human and environmental health which come from our dependence on nuclear energy.  Nearly 20,000 people lost their lives and more than 230,000 lost their homes in the triple disaster, and the long-term effects of the radiation from the power plant meltdown will continue to be studied for decades.  The US has been fortunate to avoid a significant nuclear catastrophe since the Three Mile Island meltdown in 1979 – which cost over $1 billion and 13 years to clean up.  But our ageing nuclear power plants are in need of repair, and the country still has no long-term plan for managing radioactive waste and spent fuel rods.

Just this week in Florida a study revealed that the Turkey Point power plant has been leaking radioactive water into the nearby Biscayne Bay as a result of the decrepit cooling canal system, and will likely require the plant to be closed or new cooling towers to be constructed.  This is only an example of the challenges facing our nuclear power plants.  While nuclear reactors continue to power homes and businesses across the nation, the discussion about what to do with radioactive waste and spent fuel has gone to the grave, buried with the infamous $100 billion Yucca Mountain Repository. 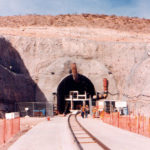 America’s ageing nuclear power plants hold over 70,000 metric tons of radioactive waste.  While the Yucca Mountain Repository is almost certain to never receive any nuclear waste, it must go somewhere!  And for now, that ‘somewhere’ is in a wet or dry storage facility at the nuclear power plant near you (see map below).

President Obama organized and commissioned a study from the 2012 Commission on America’s Nuclear Future.  The Commission developed a set of policy initiatives which would, among other things: allow for new sites  for storage and disposal (beyond the one currently allowed by law – Yucca Mountain); enable construction of new interim storage facilities; and improve transportation of waste across states and municipalities.  What are your thoughts on this proposal? 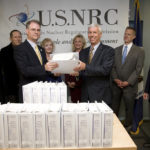 The Yucca Mountain Repository was supposed to begin accepting nuclear waste from power plants in January of 1998.  A series of court cases and transportation challenges caused delays through 2006, when then Senate Majority Leader Harry Reid vowed to block completion of the project.  In 2008, however, the Department of Energy approved the license application for Yucca Mountain, and despite the Obama Administration’s attempt to terminate the licensing proceedings, a federal appeals court in 2013 ruled that the Nuclear Regulatory Commission (NRC) must continue its review of the license application.  In 2015, the NRC completed its 5-volume Safety Evaluation Report which found the application met the regulatory requirements – with exception to certain land withdrawal and water rights.  Senator Reid stated that the NRC findings only reiterate that “…the Department of Energy lacks the required land and water rights and has no reason to expect that it will obtain them in the future.”

“The Obama Administration’s decision to halt work on a repository at Yucca Mountain in Nevada is but the latest indicator of a policy that has been troubled for decades and has now all but completely broken down. The approach laid out under the 1987 Amendments to the Nuclear Waste Policy Act—which tied the entire U.S. high-level waste management program to the fate of the Yucca Mountain site—has not worked to produce a timely solution for dealing with the nation’s most hazardous radioactive materials. The United States has travelled nearly 25 years down the current path only to come to a point where continuing to rely on the same approach seems destined to bring further controversy, litigation, and protracted delay.” 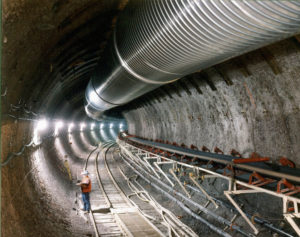 The recommendations of the 2012 Commission were to revise the Nuclear Waste Policy Act (NWPA) to provide: