How We React to Kelsey Rennebohm’s Death on Huntington Avenue 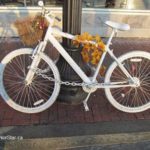 On Friday June 1st, Kelsey Rennebohm (age 28) was killed on Huntington Avenue in a bike accident involving an MBTA bus and vehicular traffic.  While the details are still being investigated, there is one fact that will not change; Huntington Avenue is one of the city’s most dangerous sections of roadway – for bicyclists, pedestrians, and vehicles.  Designed in the 1990s, the roadway offers little to no protection to the high volume of pedestrians and cyclists that share it.  How many more tragedies will we endure before taking action and fixing this threatening situation?

It is a sad truth of today’s society that in order for social, political, or environmental changes to have sweeping effect, they must generally be preceded by some devastation – as the saying goes, “With Disaster Brings Opportunity”.  The death of bicyclist and BC student Kelsey Rennebohm has brought to the surface again a serious problem that has persisted for years on Huntington Ave and throughout the city.

Further down the street in 2010, Eric Michael Hunt (age 22) was killed in an accident with an MBTA bus.  In 2007, bicyclist Gordon Riker (age 22) was killed in a car collision at the exact same intersection as Kelsey. Gordon was hit by a taxi and thrown under a truck, dying instantly.   According to his friend Kelly Wallace (age 24), Gordon wore his helmet and was a safe rider, encouraging Kelly be protective as well.  But less than a month after, Kelly was also hit and killed by a car in Allston.  To honor their passing, Zach Smith created the organization “HELL” – Helping Everyone Live Longer, which has worked for 5 years to distribute free helmets to those who need them.

The danger of the current design is very significant.  In a 9 month period (Nov ’09 through July ’10), over 15 bicycle accidents were reported through EMS response on Huntington Avenue only.  Huntington is only one of the main critical areas of concern.  Throughout the city, the EMS reported over 500 bike accidents in this 9-month period (Boston, 2010).  Thousands of bike/pedestrian/vehicle accidents occur around the city each year – not to mention the undocumented number of minor accidents and “near-misses”.

It would be morally and ethically irresponsible of us, as citizens of the City of Boston, to continue to not take action. We cannot and must not let Gordon, Eric, and now Kelsey die in vain.  The time has come to bring the community together and establish a comprehensive, short and long-term plan to improve the transportation safety in our communities and reduce the risk of future injuries and fatalities – starting at Huntington Avenue.

I have biked on Huntington, drove down it, and walked the road for years.  I have seen and been one of those drivers giving it a bit more gas to make it through a yellow light.  I have seen and been that pedestrian that walks out into traffic blindly from behind parked cars.  And I have seen and been that bicyclist in the middle of the lane, or trying to squeeze between traffic and through the red light.  The dichotomy of attitudes is clear, and the environment it creates cultivates dangerous interactions.  We are all both the cause and solution to this life-threatening situation.

Inspired by the Urban Repair Squad, I had planned for months to rouge-spray paint my own bike lane into the stretch of road, knowing how dangerous the situation was but not knowing how else to fix it in any timely manner.  In many ways, I wish I had carried through with my plans.   But the city and people must be in support of any change if it is to have positive and lasting impact.

The stretch of Route 9 (Huntington Ave) that is the ire of bikers, drivers, and pedestrians alike is laden with off-grade catch basins, intermittent sections of on-street parking, and high-density business and housing districts where double-parking and deliveries are commonplace.  This section of roadway is a classic case of a street that tries to serve two very different purposes, with very dangerous results.  Route 9 is a major arterial thoroughfare for car traffic, and this section carries more than 18,000 cars daily (massDOT, 2012).  Some other streets with similar lane designs such as Massachusetts Ave and Melnea Cass each carry around 30,000 vehicles per day.  Washington Street, where the city made 1 lane in each direction dedicated to busses and bikes, is still host to up to 15,000 vehicles per day.

The City has responded to calls for improved bike facilities with new bike lanes around the city, most recently on major thoroughfares such as Massachusetts Avenue.  This is certainly a push in the right direction.  But are bike lanes the best and most safe option, or are they merely the cheapest ‘fixes’?

Some options for Huntington Ave include (but are not limited to)

–          Bike lanes: thin biking strips along/inside car travel lanes on the right side of the roadway

–          Shared-lane arrows (‘Sharrows’): where bikes have access to the entire right-hand lane

Bike lanes on this stretch of road are unfavorable due to the high vehicle travel rate and the catch basins on the side of the street that make for a very unpleasant ride.  If bike lanes are implemented, then the cars should also have to endure “speed bumps” every few hundred feet.

Due to the limited lane width, protected bike lanes may be difficult to fit and also carry the highest installation costs of the three options mentioned.  Yet protected (separated) bike lanes have shown to be most effective in reducing injury crashes, resulting in an average of 40% less injury-crashes (Wolfson, 2011).  Protected bike lanes are most desirable for long-term planning, but are likely impossible features in the current scenario.  Additional traffic-calming measures (for example narrowed lanes, raised intersections, and curb extensions) can improve safety on Huntington Ave and streets around the city, while having little to no negative impact on vehicle travel times or emergency vehicle access.

Shared-lane arrows would likely provide cyclists with improved protection while having limited effect on vehicle travel, however a comprehensive traffic analysis is required.  Drivers may take this proposal up in arms, but realistically – will it cost drivers that much time?  And think about your fellow citizens – bikers and pedestrians are people trying to get somewhere, too.  Cars already have the advantage of effortless speed, so to have one lane sometimes moving at a cyclist speed of ~15 mph instead of the 30 mph limit is not a bad compromise.

With the recent installation of the Hubway Bike Share program, the city is now host to hundreds of new bikers.  Many of the bike-share users are tourists without knowledge of the routes and bike safety measures.  Consider for example that an average of only 20% of bike share users wear helmets, compared to over 50% of other riders.  In a world where 1/3rd of bike injuries and 3/4 of deaths are from head injuries, this puts not only cyclists but also drivers and pedestrians at even greater undue risk (Christopher M. Fischer, 2012).

While most of the Hubway bike share stations are strategically placed in areas with defined bike-routes and paths, many are not.  Less than a mile up Huntington from Kelsey’s accident (Brigham Circle) is a Hubway station where there is no bike infrastructure of any sort, which is only further promoting unsafe travel conditions for everyone in the area (the road in fact gets arguable more dangerous here than at any other point, as the E train becomes a streetcar).

The Menino administration touts a more than doubling in ridership over the past several years (Boston Bikes, 2011).  In NYC and Minneapolis, the “Safety in Numbers” theory has shown to be true – but would not be possible without the dedicated efforts to improve and expand infrastructure and safety measures (Flusche, 2011).  In 2006, 61 pedestrians and 6 bikers were killed across the state. In 2008, this figured jumped to 75 pedestrians and 10 bicyclists (Mass.gov, 2008). In 2009, Boston was the 10th most popular bike-commuter city in the US, despite being only the 20th largest by population (Bicyclists, 2009).  As the number of cyclists continues to grow with the installation of 600+ Hubway bikes in 2011, safe and low-stress infrastructure must precede further growth in riders.

With proper community input and analysis of accident reports, the city can identify dangerous areas and work to prevent future tragedies.  By continuing to partner with local bicycle and pedestrian organizations such as the Boston Cyclists Union, MassBike, Liveable Streets, and building upon the community input that the administration has begun to seek, we can drastically improve our cities transportation infrastructure and to prevent more devastation from dangerous streets.

Flusche, D. (2011). Ridership Up, Crashes Down: “Safety in Numbers” in Minneapolis. Retrieved from League of American Bicyclists: http://blog.bikeleague.org/blog/2011/02/ridership-up-crashes-down-safety-in-numbers-in-minneapolis/